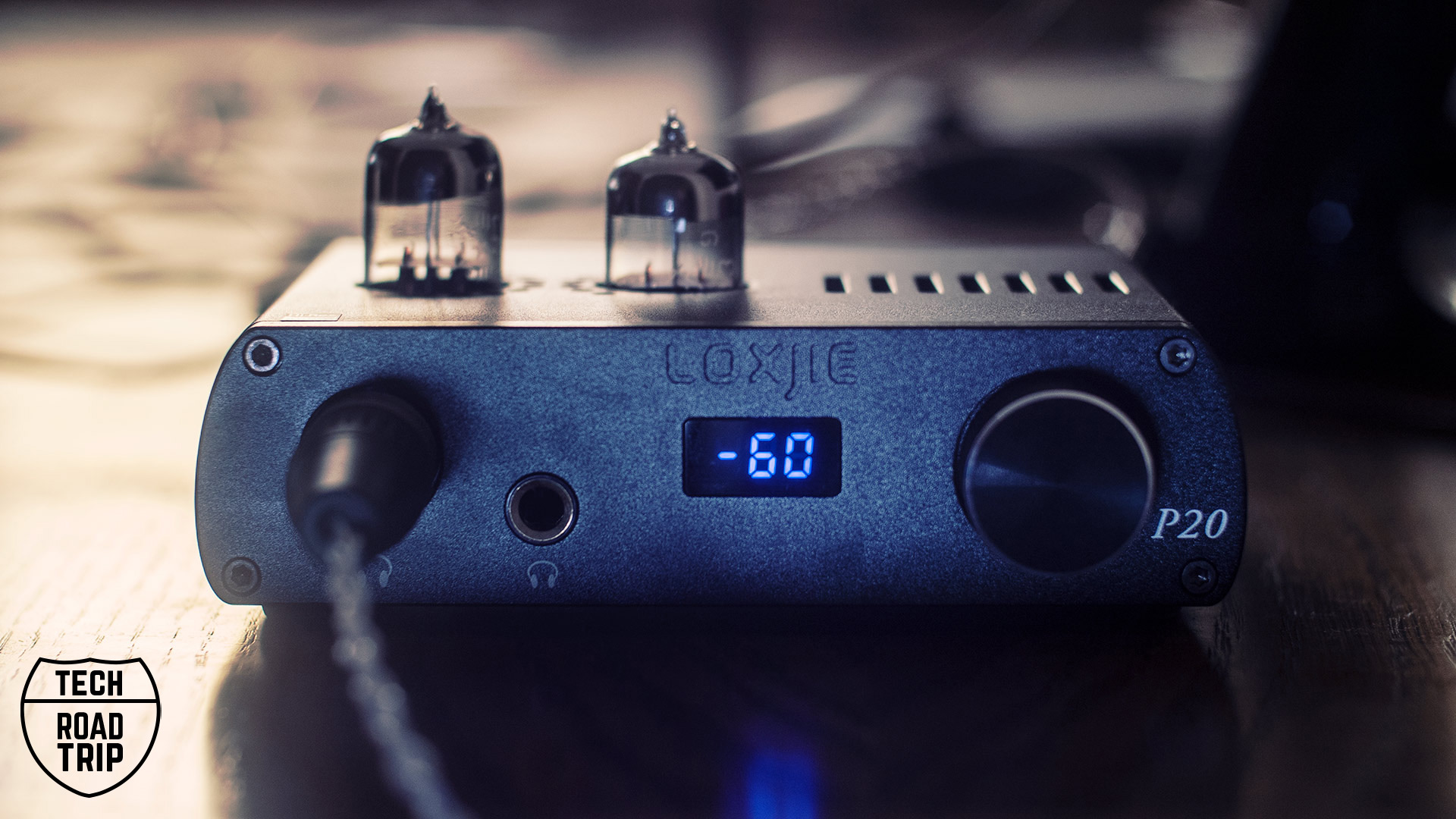 Posted at 16:45h in Audio, Headphone Amplifiers by Heinek
104 Likes
Share
Video Review available at the end of this article.

I think I can start this review with the words that I can dare to imagine the situation when someone can think of buying Loxjie P20 and exactly for who I believe this product is aimed for.
Let’s say you bought HD600 or HD6xx and you have heard from everyone that these headphones are best to pair with a tube amp, as those headphones some people describe as too clinical sounding, cold, boring with a lack of warmth, fun? And you then feel like your purchase is not complete yet again and that you are not hitting the actual full potential of your HD600s. So, then you look around browse some forums and try to find some answers which would fit your budget and the first recommendation you can hear about is Darvoice 336 or some of the versions of the Little Dots but then maybe it’s still too expensive for you or you just don’t want to invest too much into tube amp which you still don’t know if you actually will like and make it your daily driver. Plus no matter how many people have tried to explain what actually tube sound is, it’s still unclear to imagine for you. Or you are just in that point when you are interested to try true balanced amplifier? Is there actually any difference? Well, no matter in what situation you are, I already can tell you that Loxjie P20 is worth your consideration. But let me start from the beginning.

P20 is a hybrid true balanced headphone amplifier which is for its price kind of a rare product to see. There is a lot of products offering balanced output or balanced input mainly for the convenience but those are not fully (true) balanced amplifiers. And if you are looking for full balanced solid-state amp, we are talking then about prox. 500 dollars and up.

LOXJIE P20 sounds impressive from the first moment you read its description and see the price tag. You doubt then until you listen to its sound winning due its hybrid design finding the balance between solid state and a tube. 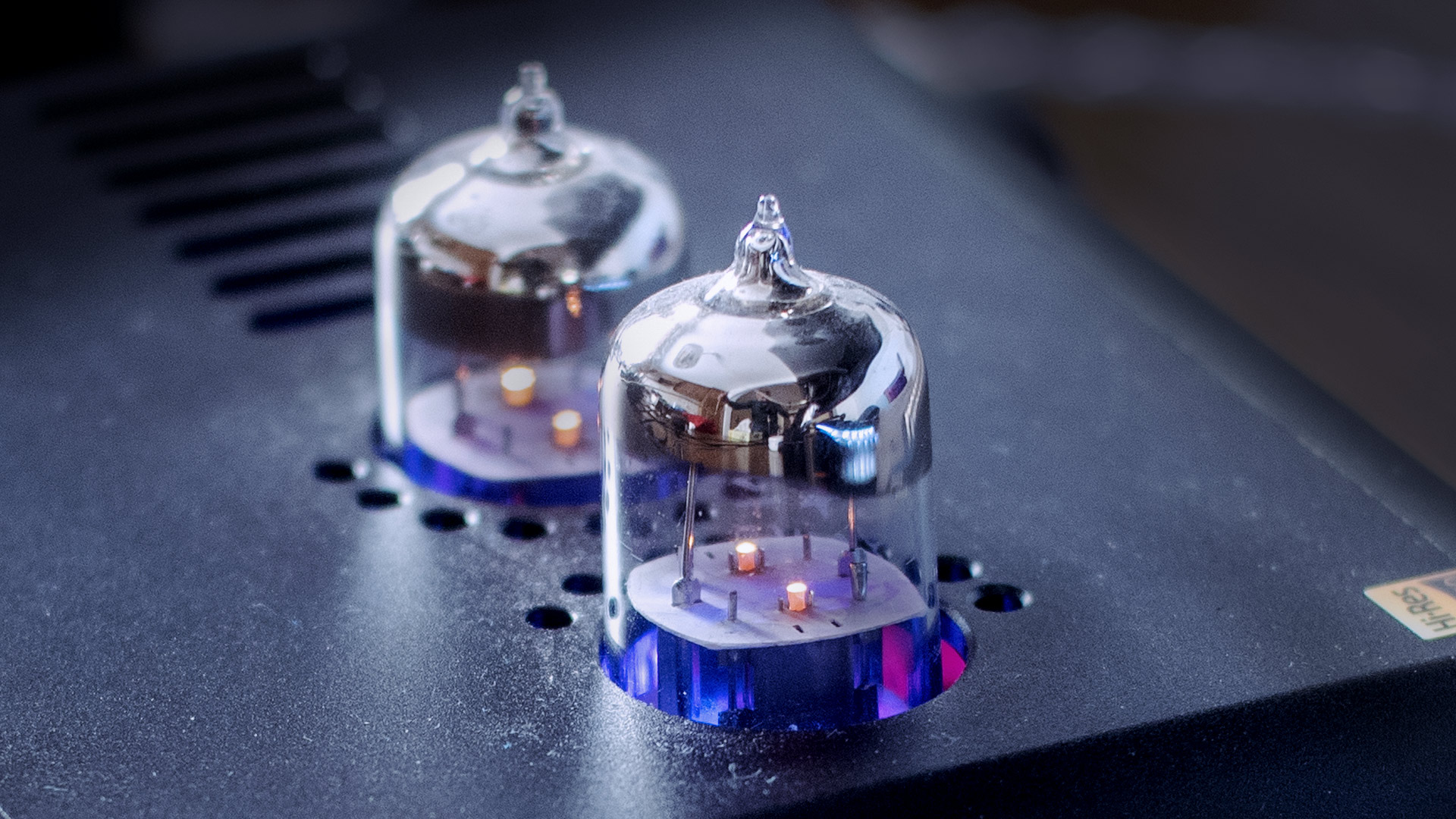 Stock 6N3 tubes it comes with. I recommend a matched pair of Reflector 6N3P tubes instead.

Loxjie as a brand sounds new but it’s actually another company as Sabaj associated with a well-known Chinese mother company SMSL. Due my experience SMSL products are always well manufactured, the build quality and finish of their products is very good and the same applies for Loxjie P20 which is very compact in size ( around 6 inches in the width) and comes in two finishes black and red. I decided for the black one as red is just too flashy, gimmicky looking to my eyes and would make me think about the price of this unit all the time. But maybe the red is the one you would prefer so it breaks the black and silver design routines so overused in this industry. The only flaw I found regarding the design and build quality is the volume knob which feels ok but is a bit wobbly. Ok. One more. The tubes. Well, I will talk about them later. Other than that, I think most people will be happy how compact looking this amp is and with the build quality.

I think the main selling point here is clear and it’s the true balanced circuit, that’s the main feature so attractive for everyone looking for a step up from a cheaper solid state or tube amp without it, plus you can combine them as you want, you can have unbalanced input and balanced output or the other way around until you upgrade and have both balanced so you reach the actual point and benefit of this amp, the circuit.
Besides that, Loxjie P20 is super easy to operate. The volume knob is stepped with a very light resistance between the steps and works also as an input and output selector and on/off button on a press, hold.

The small display on the front panel shows the volume (60 steps) and when changing the outputs, inputs. Personally, I don’t like the blue color of the display, simple clean white would be much nicer in my opinion. On the front panel you can find also then the 3-pin XLR output socket and quarter inch for the unbalanced output. On the rear panel you can find one pair of 3-pin XLRs and RCA inputs/connectors. Oh, one more thing, there is on the left top corner of the amp a small Hi-res audio sticker, which I peeled off immediately after I took pictures for this review. Silly. 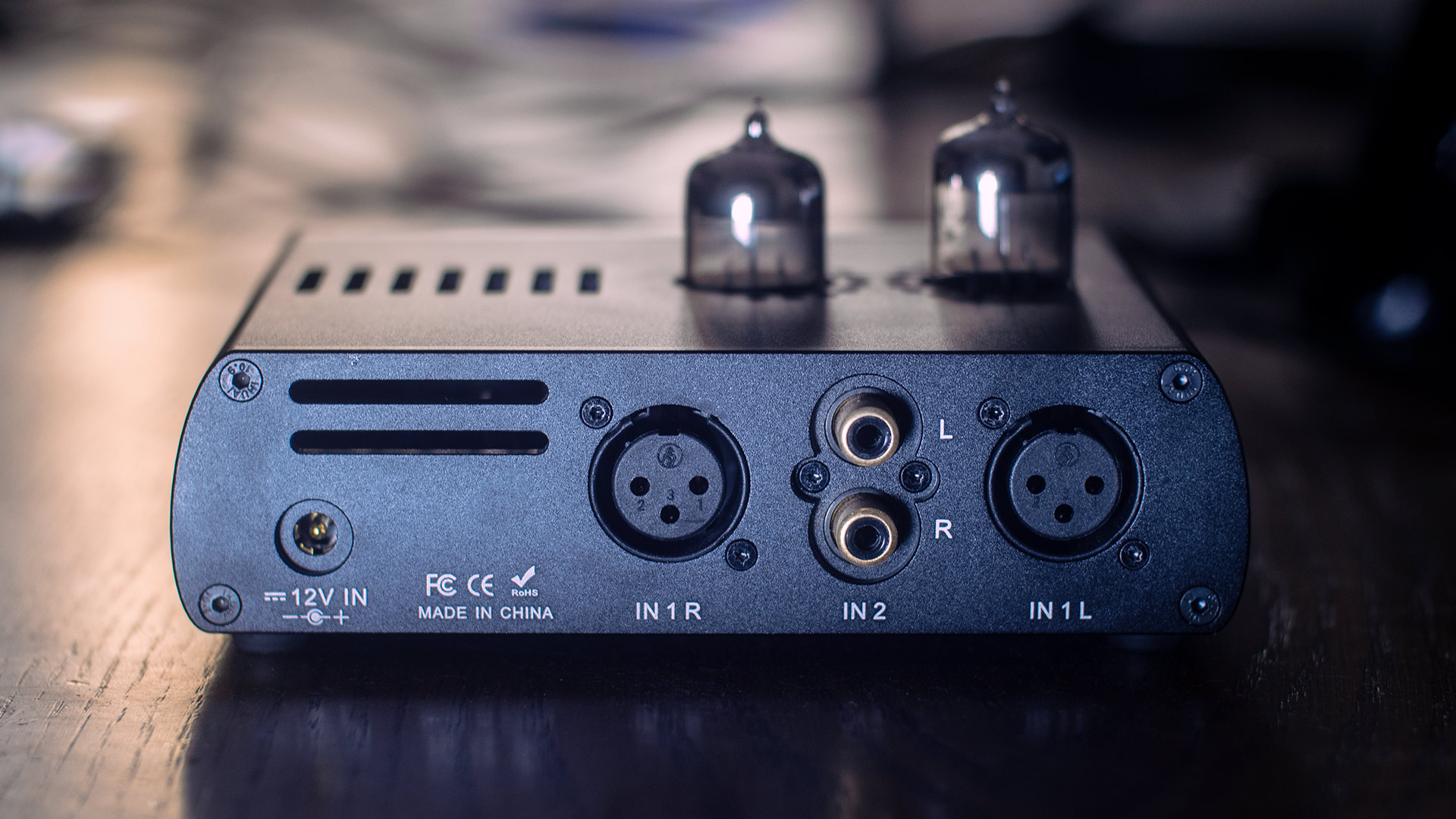 About the full balanced circuit

I already spoke and explained the advantages of balanced outputs in my review of SMSL IQ here so I will just explain the actual benefits of the full balanced circuit in the simplest way I can. First as it comes from sound studios, recording studios or DJs, balanced cables were here for one main reason from forever which was to eliminate interference and noise for the signal traveling in long distances from one gear to another. But if you are at the beginning of your audiophile journey I would suggest you to think just about two things when it comes to balanced amps and that is that the balanced output will output always more power than unbalanced and that full, real full balanced circuit is mainly designed with the giving benefit and aim to lower distortion and noise due the greater resistance to undesired interference (electromagnetic and also radio frequency interference).

First bear in mind that if you see a balanced amp with also unbalanced output/input you can be sure that the engineering was clearly focused on the balanced circuit to deliver its benefits at its best as the budget has allowed and so it’s the case here. The difference between the unbalanced and balanced is significant here and actually more that I have ever heard and was expecting, it’s not just about the power delivery.
The actual sound I would describe as impressive for its price and the actual hybrid architecture seems as a clever solution to achieve a compromise or call it a balance between the significant tuby sound as for example the mentioned Darkvoice has and some “clinical – digital” sounding solid state amplifier.
Don’t get me wrong here, Loxjie P20 is not perfect as no amp is for everyone and can’t be compared to some more expensive tube amps I have heard in sound quality indeed, but those are definitely in a price range from 500 dollars and much higher. If you would try to compare it to those plus pair this amp wrongly you could feel this amp too thick sounding and like your headphones lost the detail you know and you love. So, is it better than Darkvoice? It all depends what you prefer. I would say if I should choose one of those as my only daily driver, I would go for P20 as the Darkvoice is just “too much tube” for me. 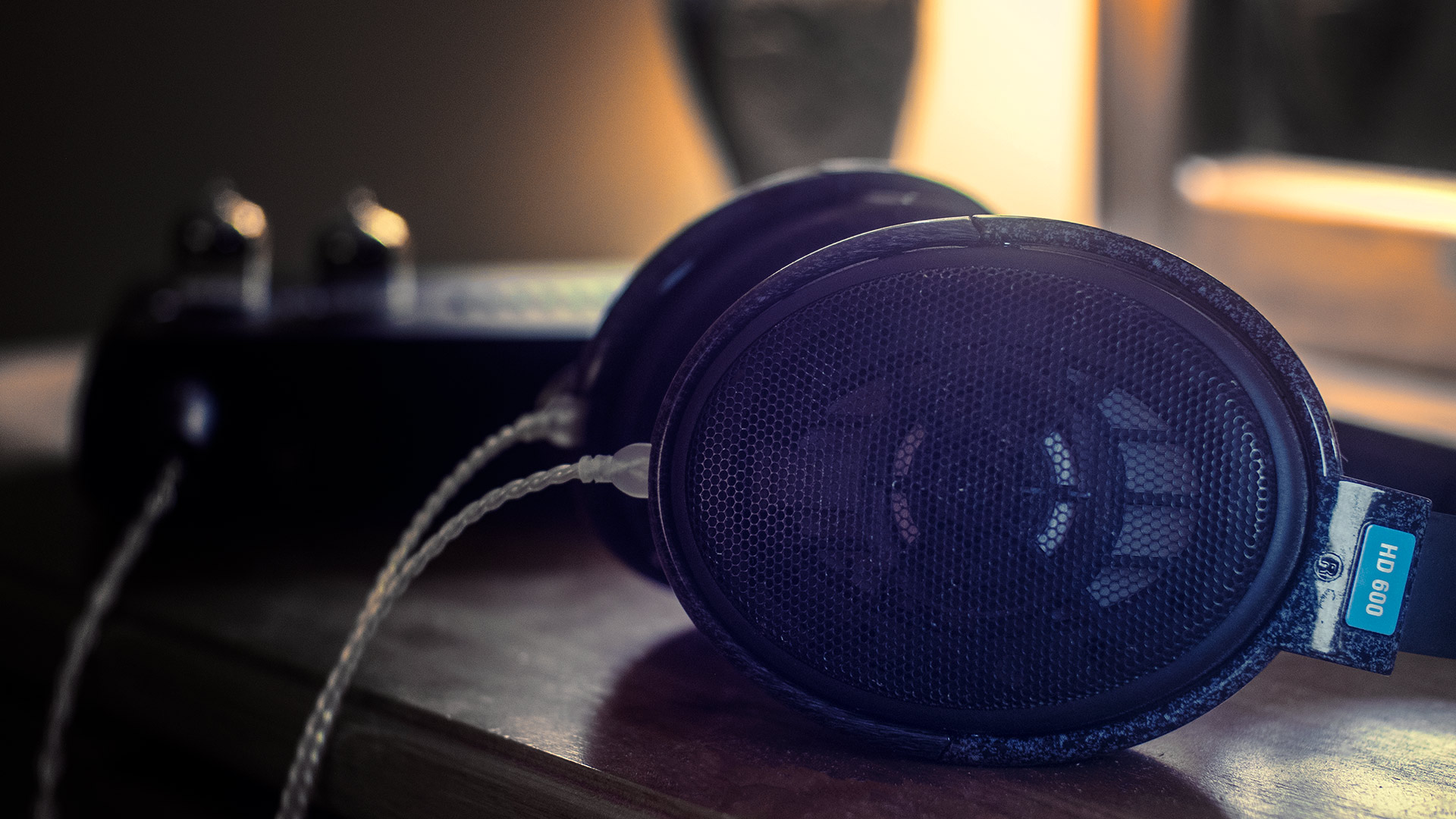 LOXJIE P20 paired with HD600 headphones, the first cans you imagine when you think about tube amp.

Are HD600 or HD6xx a good, ideal option to pair with Loxjie P20? I would say HD600 are definitely still better to pair with this amplifier than HD6xx or other headphones I tried with it but also I found it not as the absolute ideal pairing with HD600, but that I would say only if you are used to another tube amp from a higher price range with more refined sound quality.
I also found, for me worked the best to pair Loxjie P20 with SABRE chip based DACs and silver based cables I had available.
With that combination in balanced in and out the sound was once more again impressive for a 100 dollars amplifier. I still could hear a slight loss of a detail with my hd600s but it was not so significant and well worth the more opened, wider soundstage and the warmth coming in to all the vocals, softening the highs a little but not too much. The mid range and highs are overall very pleasant change in comparison to a solid-state amp paired with hd600 and the bass comes up as thicker then you ever heard before with hd600. Overall, the sound is open and airy with wider soundstage and with the tube warmth on top of it but thanks to the hybrid design it is not overwhelming the timing and instruments separation.

325mW in 300 ohms in balanced is enough power for HD600 and for most other common headphones on the market. I never crossed the half of the volume, level 40-30 was the optimum when 30 was already really loud (the volume goes from 60 to 0). So absolutely ideal volume levels for the Sennheisers with regards to avoiding any distortion.

Loxjie P20 uses 6N3 tubes and as I already mentioned a little bit in the build and design section of this review the tubes this amplifier comes with and the quality of them is a question mark. One of them was significantly smaller (in height) than the other one on my unit, which bothered me but it’s also the part of this amplifier I would replace and experiment with. I tried to replace them with REFLEKTOR 6N3P-E and the difference in sound quality in comparison with the ones it comes with was a big improvement and exactly to my taste. I’m not saying the stock ones sound absolutely trash but definitely there is a place to experiment and the possibility to achieve different sound signatures.

I think it’s time to go back to the beginning of this review and those questions for who this amplifier I believe is aimed for. For 100 dollars you are getting a hybrid tube amp which in full balanced outperforms much more expensive competitors, that’s important to say first. Is it worth it as an upgrade for someone who for example has some cheaper solid state amp as FX audio or SMSL, absolutely but if you will use the full balanced path, which probably means you will need to upgrade other parts of your system as a DAC or, and your headphone cable too. (I will put some options below so you can find some cheap options to start with.)

As another part of my conclusion I would say when you look at the market you can find those cheap, small tube amplifiers which are all around 60 dollars or so but those I would completely avoid if I would be you. Loxjie P20 is on the other hand the only very affordable tube amp I would start with to consider. If you want the icon of the “budget” tube amp and you want that classic tube sound nobody actually can describe properly, go for DarkVoice instead, but that is again 2 times more money than P20 and it’s not an amp I would use for everyday listening. Do I recommend this amp? If you will use it with the balanced in and out, yes absolutely it’s a good start in tube audiophile world if you are on a budget.