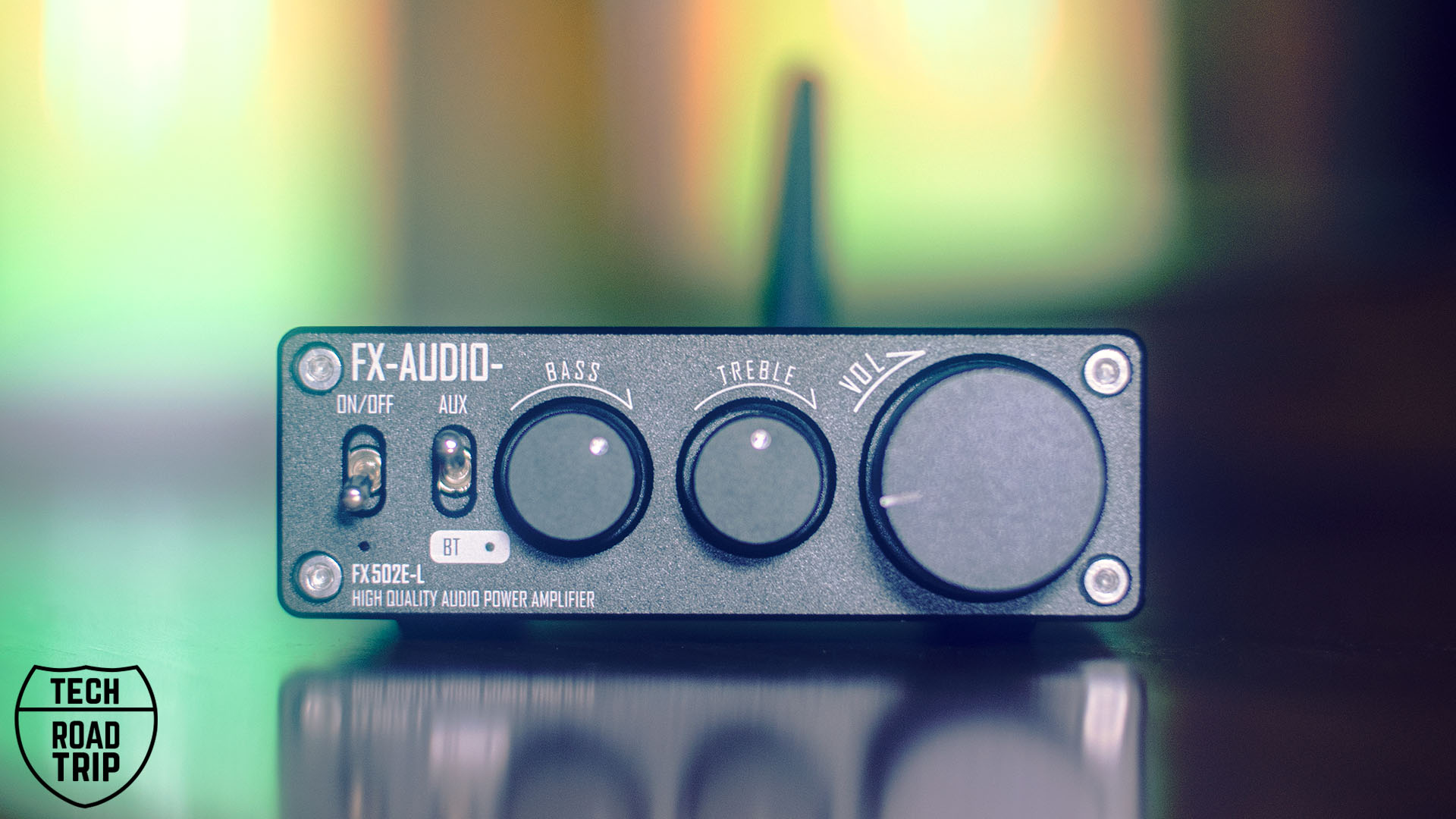 It has been quite a while since I reviewed a budget DAC/Headphone amp from FX AUDIO, the popular small brother of X60 the FX AUDIO DAC-X3 which was a good start up DAC/Headphone amp on a very tight budget. That review was one of the most popular on my website and youtube channel for a while so I decided to check this new very budget friendly integrated speaker amplifier from FX audio called

which sells for around 50 bugs when writing this review (check current price at the end of this review) .
So let’s have a look if it’s any good and if you should consider it for your setup.

The slam in lower frequencies is so enjoyable and surprising on that level that I didn’t even know Wharfedale 220’s can even go so low. 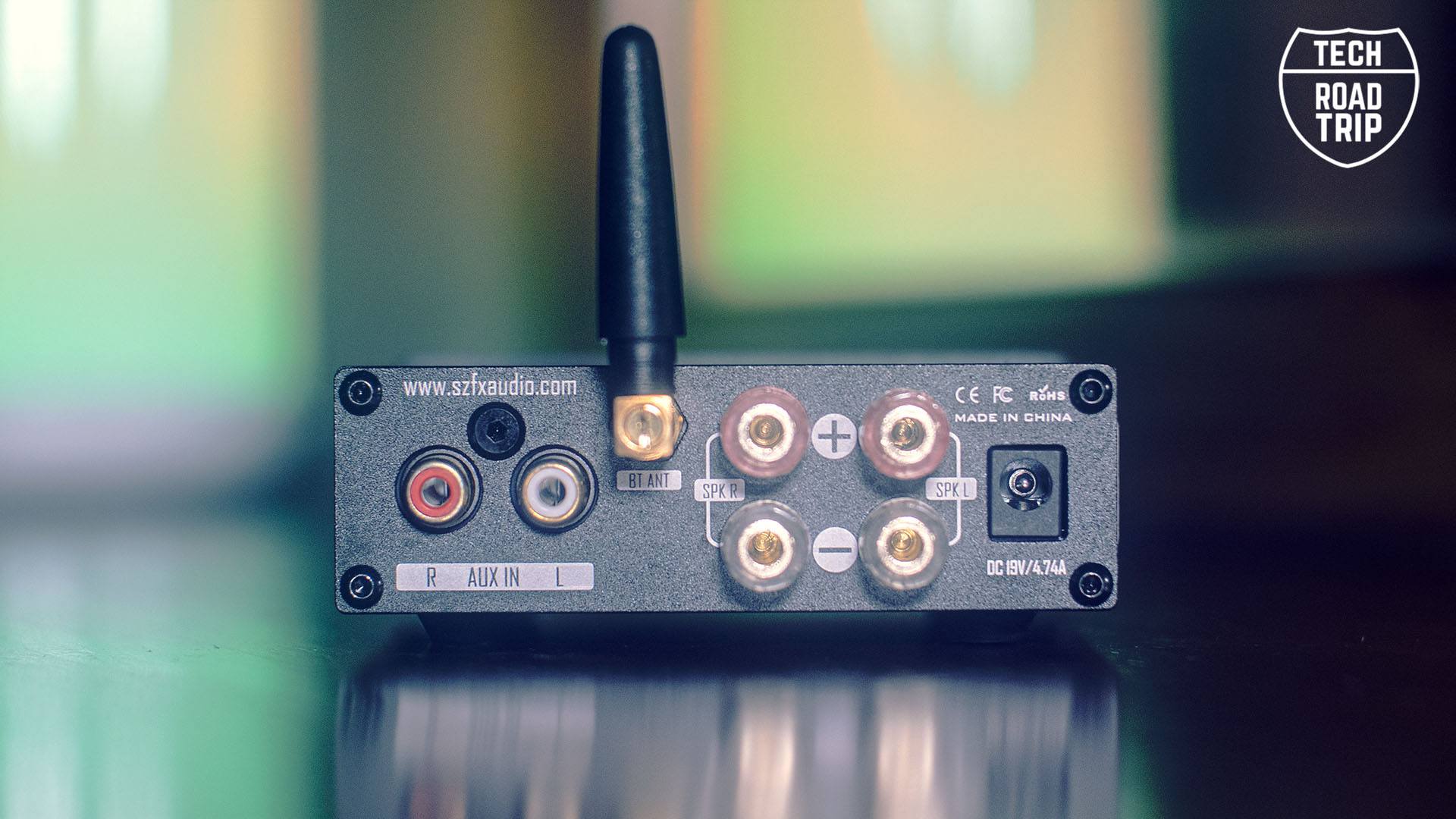 What is in the box

What you will find in the box besides the speaker amplifier itself is the power supply which is unfortunately the lower powered version 19V 3.5A not the 24V version but about it later on. Then you can also find in the box the usual manual written in english and chinese and RCA to RCA cable with gold plated connectors.

Overall when it comes to build quality the first thing which will surprise you is how small this amp is the depth and height of the amplifier is just about the same as the DAC-X3 but FX502E-L is a bit wider. The case is made of metal or aluminium with smooth black matte finish. The knobs feel solidly built and are super smooth but not too loose. Overall the labelling / text is properly aligned on both front and back. The chosen fonts are a question of a taste but I quite like it. The two old school stick switches for the power on/off and source selection feels as you would expect with a proper tactile feel. All the connectors on the back are gold plated and the spacing between them even on such tight space feels alright and most banana speaker plugs should be fine to connect . 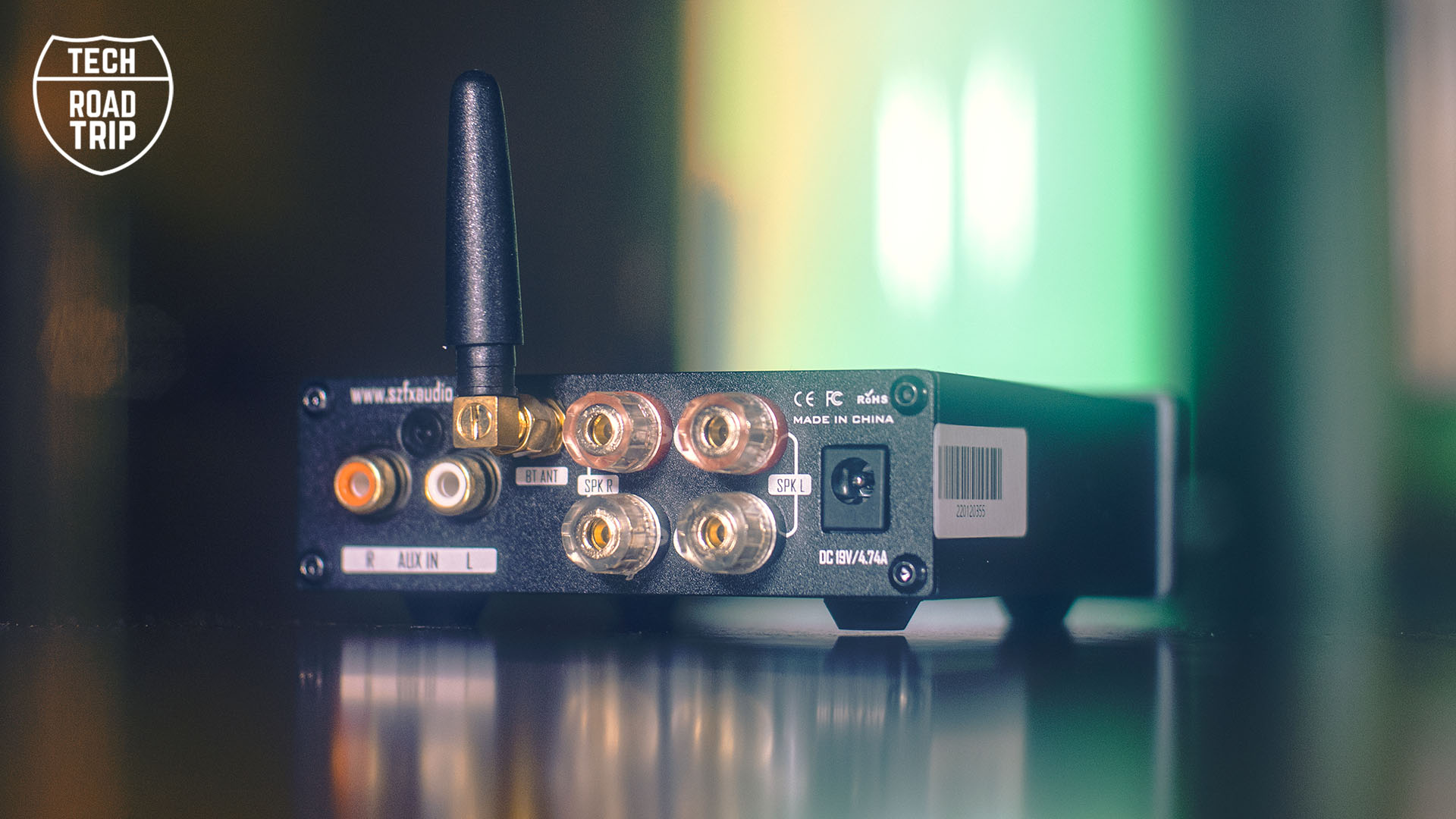 FX audio FX502E-L is aimed due its tiny dimensions mainly for a desktop use(3.8 inches wide 4.2 inches depth and 1.3inch height)

When it comes to features as it is so trendy nowadays this amplifier features besides RCA input also a bluetooth so you can stream from your phone or any other device wirelessly, which I don’t recommend if you care about the sound quality but about it later on in sound section. The bluetooth version FX audio FX502E-L features 5.1 but doesn’t support APT-X, just standard codecs. Besides that on a front panel of this amplifier you can find tonal control knobs for treble and bass. 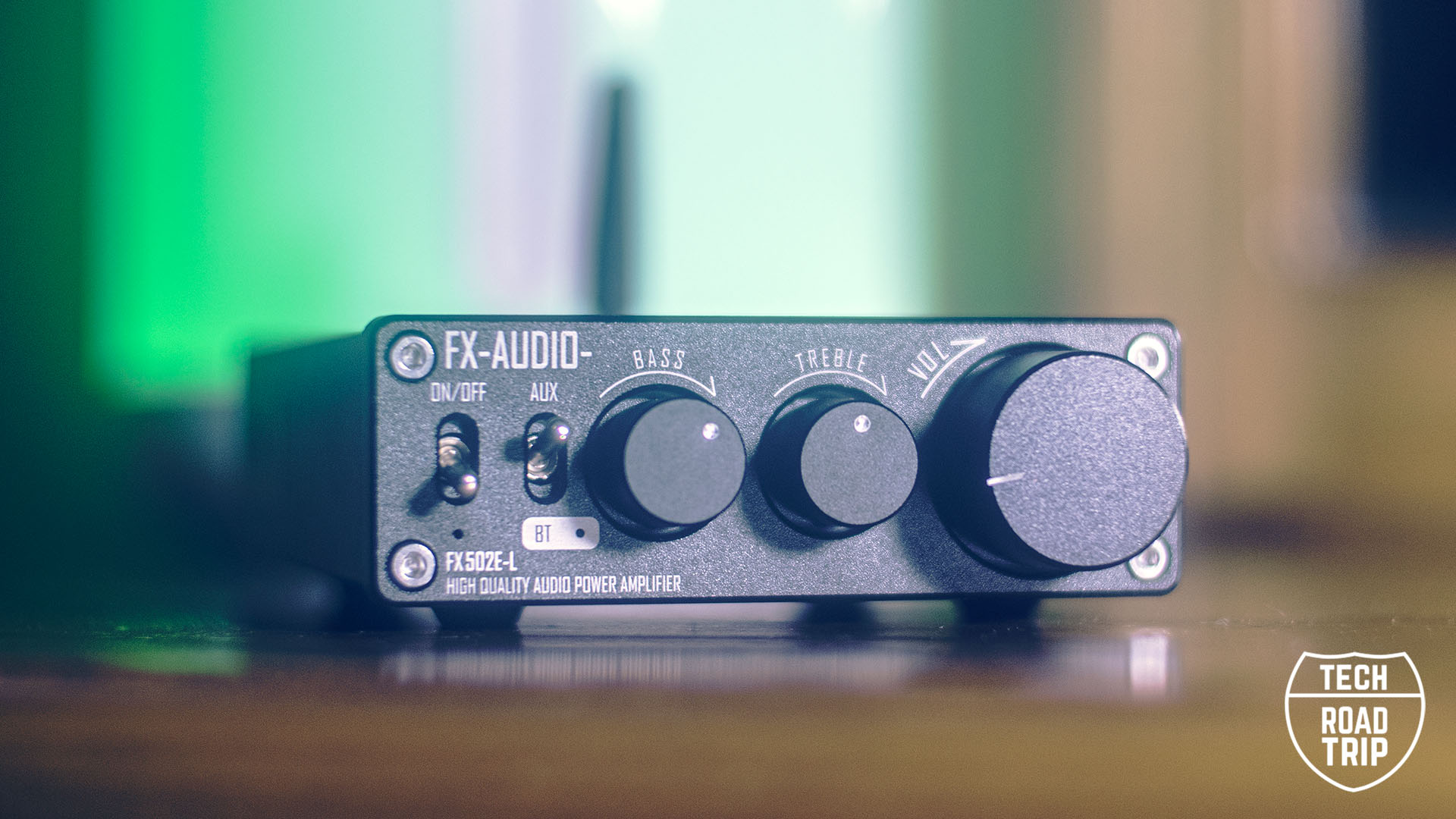 All analog. Power and source switch in a classic fashion and smooth analog knobs work as expected with a nice, solid feedback

FX audio FX502E-L is a low, very low budget amplifier and on paper it will not shine with today’s so popular Infineon chip as other amplifiers from other chinese manufactures. It’s as you can presume a class D amplifier with signal to noise ratio 85db, efficiency higher than 90 percent with THD listed in the manual as less than 10% in it’s highest power delivery. But numbers are not everything so let me go more in a depth how this little amp actually sounds.

The system I was using for the review included SMSL Sanskrit 6th DAC and as a digital transport I was using Raspberry pi 4 as a streamer with Allo DigiOne with coax output.

Bass
Let me first talk here about the tone controls here. If you read some of my reviews you know that I prefer a direct source without any EQ or modification of the signal. So first I nulled both of the treble and bass knobs to default position which is 12 o’clock position and the sound felt to me just very sterile and flat more that I would like. The bass was below the normal I am used to from the Wharfedale speakers so I tried to use the bass knob to adjust the base to my liking. And as you can even refer to the pictures I have taken, the best position I found for the bass knob was just about 2 o’clock. With this adjustment I have to say I was “wow” surprised how this amp sounded. The slam in lower frequencies was so enjoyable and surprising on that level that I didn’t even know Wharfedale 220’s can even go so low. The 2 o’clock on the bass knob was the sweet spot for this FX audio FX502E-L amplifier as when I tried to go even a bit more on that bass the usual boominess in tha bass with a prominent leakage to the mids was introduced significantly.

Treble
With the treble I didn’t have a need to adjust the knob from the default 12 o’clock position. The treble here is not harsh but also not particularly detailed, slightly metallic feeling, slightly grainy but that was expected from such a low budget Class D amplifier. Overall with a good pairing it is not harsh sounding amp but I believe if you would have more treble focused speakers this amp would be “no go”. In my case the “saver” were my Wharfedale speakers thanks to its musical, mellow sound presence.

Mids
Midrange is quite surprisingly forward on this amp but it lacks a detail and refinement. The good thing is that if you really keep the bass knob below the 2 o’clock position the mids are very present and not overwhelmed, shadowed with the bass/ sub bass. So even mainly vocal based songs are very enjoyable and nice to listen to. If you like electronic music you will enjoy this amp for sure.

Soundstage and imaging
The soundstage is quite wide, not super wide but not narrow either so no complaints there. Where FX audio FX502E-L amplifier lacks a bit is in the depth of the soundstage and imaging. As the vocals and particular instruments don’t go as forward as I am used to with these speakers but it wasn’t something disturbing at all to me, locating particular instruments on the stage was also not as precise as I am used to with the other amps I have tested on this system.

Bluetooth as a source
Here is the disappointment fairly expected to be honest. The unit I have tested had no issues connecting to my phone or computer but the sound through bluetooth was more tiny than expected, metallic and lacked resolution. I would never suggest using bluetooth if you care about sound quality.

As I already mentioned in the treble section, definitely I would not pair this amp with treble focused speakers and would be careful with previous generations of Sabre chip based DACs.

Overall I was quite surprised how this FX audio FX502E-L amplifier sounds and how it could manage to drive, even for its low power delivery on a paper at very decent volume levels, not so efficient speakers as Wharfedale diamonds 220. The slam in the sub bass was so enjoyable and surprising that it made me smile when it surprised me in some particular parts of the songs and the fact that the mids were not overpowered by the bass was pleasant in this price category. This amplifier is definitely aimed for desktop use due its size and power, it’s well built and due my experience with FX Audio it will last for a long time. If you are on a budget and are looking for a good sounding amp with a decent bass slam, this is a good low budget starting point for your desktop setup.